You might rightly ask: “What possessed you to name your website MonkeyPee.ca?” It’s certainly a fair question.

In part, it boils down to the difficulty finding a domain name that a) hasn’t already been used and b) doesn’t have some sort or unintended, unwanted connotation.

Then you need to find a domain name that has some sort of meaning, even if it only has meaning for yourself. That’s what led me to MonkeyPee.ca as the domain for this website. It’s where I plan to post my observations and opinions on politics, religion, music, and life in general.

Let me explain the MonkeyPee.ca website name a bit further. Diehard fans of The X-Files will catch the reference to “monkey pee” right away. It’s a line of dialogue uttered during the finale episode of the show’s first season by fictional FBI Special Agent Dana Scully (played by actress Gillian Anderson) . The episode, known as “The Erlenmeyer Flask”, remains one of my favourites – I was hooked on The X-Files from the first moments of episode one, season one. 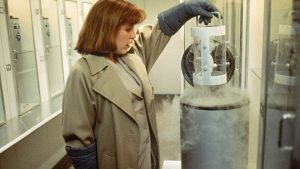 I won’t digress into a lengthy retelling of the “The Erlenmeyer Flask” plot. Suffice it to say that it revolves around some of the best X-Files themes and characters, including aliens, human-alien hybridization, government conspiracies, “Cigarette Smoking Man” (also known as “Cancer Man” played by Vancouver actor, William B. Davis), and Deep Throat. You can find more about the episode’s plot here and here.

In the interest of time, here’s a Reader’s Digest summary of the plot: While investigating the death of a genetic researcher at a laboratory, FBI Special Agent Fox Mulder hands Scully an Erlenmeyer flask labeled “Purity Control”. It contains some sort of liquid. Mulder asks Agent Scully (the duo’s paranormal sceptic) if she can find out what the liquid is. She looks at the flask, takes it, and says: “Okay, Mulder, but I’m warning you… if this is monkey pee, you’re on your own.”

Cutting to the chase (as someone I used to work with was fond of saying): When the contents of the Erlenmeyer flask are analyzed, they turn out to be an unusual form of bacteria with five DNA base pairs rather than the four DNA base pairs known on planet Earth. The fifth base pair, and its two nucleotides, are a complete mystery.

The plot ultimately leads Agent Scully to a high security government facility where she correctly guesses – in a moment of inspiration – that the words “Purity Control” written on the bottom of the Erlenmeyer flask is the password she needs to enter the secure area of the facility.

Once she’s inside, Agent Scully locates a jar with what appears to be the preserved fetus of an alien being (apparently a “grey” alien). The discovery is fairly compelling evidence (in the fictional world of the X-Files) that Agent Mulder’s belief in a government-alien conspiracy is correct – remember, Scully is the sceptic on the team and she is standing face-to-face with what appears to be the truth (which, we all know, “is out there”).

My essential point here is that the contents of the Erlenmeyer flask, on first glance, appeared to be nothing more than monkey pee in the laboratory. But when Agent Scully dug deeper, and had the contents analyzed, they turned out to be something profound and meaningful (if only in a fictional X-Files sense). That’s what appealed to me when I was searching for a domain name, and that’s why I decided to call this website MonkeyPee.ca.

Hope you enjoy it.

MonkeyPee.ca is my personal website. It’s where I share my observations and opinions on politics, religion, and life in general. Hope you enjoy.